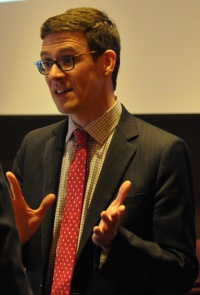 Global outcry over continued imprisonment of Baha'i leaders in Iran

NEW YORK — Around the world, government officials, the news media, and human rights activists have once again raised their voices in protest over the continued imprisonment of the seven Iranian Baha'i leaders.

The outcry has come on the sixth anniversary of their wrongful imprisonment. Six of the seven were arrested on 14 May 2008, and all are now serving 20-year sentences, the longest terms of any current prisoners of conscience in Iran.

Perhaps the most dramatic commemoration of their arrest and imprisonment was held in Tehran on 12 May when nearly a dozen human rights activists, journalists, and a religious leader gathered with Baha'is at a private home.

Outside Iran, observances, commemorations or other events have been held in Brazil, South Africa, the United Kingdom, and the United States, among other countries.

These events also coincide with the release of a major new documentary film about the persecution of Iranian Baha'is, "To Light a Candle", produced by prominent filmmaker and journalist Maziar Bahari.

"As Iran approaches the anniversary of Hasan Rouhani's presidential victory, the Islamic Republic's human-rights record, particularly its treatment of religious minorities, remains abysmal", wrote Robert George and Katrina Lantos Swett in The Wall Street Journal on 19 May 2014. "This is especially true for the Baha'is, Iran's largest non-Muslim religious minority."

Writing for the Guardian's Tehran Bureau on 19 May, Ramin Ahmadi said the fate of the seven – and all Iranian Baha'is – is "the fate of all Iranians who do not conform in one way or another."

"Their religious freedom, their human rights are an essential prerequisite for our freedom, our human rights", wrote Mr. Ahmadi, co-founder of the Iran Human Rights Documentation Center.

Dr. George and Dr. Swett, who both serve on the U.S. Commission on International Religious Freedom, wrote: "As with the cases of jailed Christian pastors, such as Saeed Abedini and Farshid Fathi, the Tehran regime shows no signs of wanting to free the so-called Baha'i seven – Baha'i leaders jailed on spurious charges, from espionage to "spreading corruption on the earth" – nor of stopping the persecution of its Baha'i population, which numbers more than 300,000."

Irwin Cotler, writing in Canada's National Post, also used the sixth anniversary of the arrest of the seven to call attention to human rights violations generally in Iran.

He called the 20-year sentences "a virtual death sentence for some, given their advanced age", adding that "the Iranian regime has made the very membership in and practice of the Baha'i religion a crime in itself." Mr. Cotler is a former Minister of Justice and Attorney General of Canada.

In the United Kingdom, the Foreign Office issued a press release calling for the release of the seven.

"Six years ago today, seven leaders of the Baha'i faith in Iran were imprisoned for 20 years each for practicing their religion," said Hugh Robertson, Minister of State for the Middle East. "I call on the Iranian authorities to release them as a matter of urgency. I was also deeply concerned to learn of the recent reports of the desecration of a Baha'i cemetery in Shiraz, where approximately 950 Baha'is are buried."

In Canada, Andrew Bennett, the Ambassador for Religious Freedom, issued a statement on 14 May noting the sixth anniversary of the arrest of the seven and expressing sadness that "the situation for Iran's religious minorities remains dire, with nothing to show but President Rouhani's empty promises."

Others commemorated the sixth anniversary of the arrest of the seven in diverse ways.

In the United States, the newly-released documentary "To Light a Candle", produced and directed by former Newsweek Tehran correspondent Maziar Bahari, premiered in a half-dozen cities in North America in May, including Los Angeles, New York, Toronto, and Chicago.

Writing in The Huffington Post, journalist Omid Memarian called the film "a turning point in addressing the circumstance of Baha'is in Iran.

"It unveils decades of repression, persecution and intimidation against a peaceful community of Iranians whose lives have been dramatically undermined by religious intolerance by the Iranian ruling class", wrote Mr. Memarian.

Also in the United States, four Members of Congress have drafted a letter to President Barack Obama about the deterioration of human rights in Iran. The letter, which devotes a paragraph to the situation of the seven Baha'i prisoners, is currently circulating Congress, gaining additional signatories.

In addition, thirteen faith-based organizations in the United States, including the American Jewish Committee, the American Islamic Congress, the Anti-Defamation League, the Baptist World Alliance, and the Hindu American Foundation, have sent a letter to US Secretary of State John Kerry, saying that the treatment of the seven is "emblematic of a deteriorating human rights situation in Iran."

"We are deeply concerned about religious freedom and human rights in Iran," states the letter. "We ask you to call for the release of the [seven] and all prisoners of conscience in Iran, and to speak out for the fundamental rights of all citizens of Iran."

In Brazil, representatives of the Baha'i community, the National Council of Christian Churches, the Brazilian Spiritualist Federation, and of the United Religions Initiative gathered for prayers in front of the Brazilian Congress building.

They were joined by Senator Ana Rita, president of the Human Rights Commission of the Brazilian Senate, who called for the immediate release of the seven and an end to the persecution of Iranian Baha'is.

On that same day, Senator Eduardo Suplicy took the floor in the plenary session of the Brazilian Senate and spoke in defense of the seven.

In South Africa, SAFM, the largest talk radio station in the country, carried a 30-minute program on 15 May that focused entirely on the systematic and ongoing persecution of Baha'is in Iran.

The seven Baha'i leaders formed the entire membership of the now-disbanded group known as the "Yaran" or "Friends in Iran", which operated with the explicit knowledge of the government to tend to the spiritual and social needs of the 300,000-member Baha'i community of that country.

On 14 May 2008, in a series of early morning raids in Tehran, six of them were arrested: Fariba Kamalabadi, Jamaloddin Khanjani, Afif Naeimi, Saeid Rezaie, Behrouz Tavakkoli, and Vahid Tizfahm. A seventh member of the group, Mahvash Sabet, had been detained two months earlier on 5 March 2008.

Afterwards, the seven leaders were subject to an entirely flawed judicial process. During their first year in detention, the seven were not told of the charges against them and they had virtually no access to lawyers. Their trial, conducted over a period of months in 2010 and amounting to only six days in court, was illegally closed to the public, demonstrated extreme bias on the part of prosecutors and judges, and was based on non-existent evidence.

"The bill of indictment that was issued against our clients...was more like a political statement, rather than a legal document," said one of their lawyers, Mahnaz Parakand. "It was a 50-page document...full of accusations and humiliations leveled against the Baha'i community of Iran, especially our clients. It was written without producing any proof for the allegations."

Today the seven endure harsh conditions in two of Iran's most notorious prisons. The five men are incarcerated at Gohardasht prison in Karaj, and the two women remain at Tehran's Evin Prison. They are all in special wards for prisoners of conscience, where they face added restrictions and heightened surveillance.