Violence with Impunity: Acts of aggression against Iran’s Baha'i community 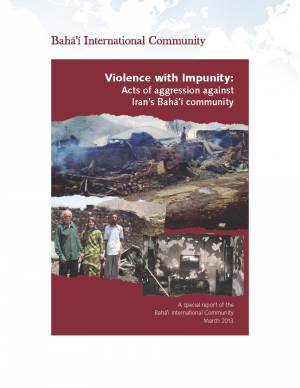 This new 48-page report documents the rising tide of violence directed against the Iranian Baha'i community – and the degree to which attackers enjoy complete impunity from prosecution or punishment.

During the period from 2005 through the end of 2012, the Baha'i International Community has documented 52 cases where Baha'is have been tortured or held in solitary confinement while in detention. Another 52 incidents where Baha'is have been physically assaulted—sometimes at the hands of officials and sometimes at the hands of plainclothes or unidentified attackers—have also been documented, as have some 49 incidents of arson against Baha'i homes and shops, more than 30 cases of vandalism, and at least 42 incidents of cemetery desecration.

Yet in none of these incidents have attackers – whether government agents, local officials, or plainclothes or otherwise unidentified individuals – been prosecuted for their crimes.